THE SINGLE-FLOOR HOUSES HAVE A CASUAL AIR, AND MELD THE OUTSIDE AND INSIDE SEAMLESSLY

Ranch living keeps it on the level. Spread out over one floor, these homes are more casual than other styles, often lacking the symmetry of more classic designs. Buyers are attracted to that casual air, and the style maximizes indoor-outdoor living that adds to the feeling of ease. The homes can also allow for privacy, with clever layouts and landscaping.

Modern examples incorporate features like open-floor plans, floor-to-ceiling windows, and the latest technology into the build, but they are still centered on indoor-outdoor living.

The style flourished in places like California, where the weather allows for the outdoors to be an extension of the home most of the year. Many of these were built as suburban developments in the years immediately following World War II.

“In the 1930s, ’40s, and ’50s, most of the very good residential architects here in California were designing ranch houses; it was just part of their portfolio,” explains Irvine, Calif.-based architect Alan Hess, author of The Ranch House. “They are just excellently designed.” Architect Cliff May popularized the style, inspired by the adobe ranch houses owned by his family near San Diego, according to a 1986 New York Times article.

“I rebelled against the boxy houses being built then,” May, who died in 1989, told the Times. “The ranch house was everything a California house should be—it had cross-ventilation, the floor was level with the ground, and with its courtyard and the exterior corridor. It was about sunshine and informal outdoor living.”

May built the first home in this style in 1931, and, over his career, designed more than 1,000 custom houses. The bulk of them were in California, but he also had projects as far away as Ireland, Australia, and Switzerland.

Modern architects are also melding cutting-edge design with one-level living. In Santa Barbara, Calif., local architect Ken Radtkey and his team at Blackbird Architects created a ranch-style home there in 2016. It incorporates a modern kitchen, dining, and living area as the center of the home, with the master suite and office separate from the additional bedrooms. Guests and residents can access the outdoors from almost anywhere in the home.

The home has modern sliding doors and floor-to-ceiling windows, and its curved roof creates a shaded outdoor living space. And the outdoor areas are just as well planned, with native and drought-resistant plantings, grass terraces, an orchard, a pool, gardens, and a koi pond with a stone waterfall.

The owner’s imported Moroccan doors have been incorporated throughout the house, creating a unique contrast to the home’s clean lines, according to the architect. There’s also a separate garage with an artist’s studio. Recently listed for just under $5 million, Montecito-based Sotheby’s International Realty agent Joe McCorkell is representing the property.

The Rancho Santa Fe home, has an open-floor plan.

Homes by May are still in demand, as well, according to Clara Yang, an agent with the Beverly Hills Brokerage of Sotheby’s International Realty. Yang is currently marketing a three-bedroom, two-and-a-half bathroom home designed by May in 1948. Located in the lower Mandeville Canyon area in Los Angeles’ Brentwood neighborhood, the home is listed for $3.6 million.

The kitchen and bathrooms of the 2,322-square-foot home have been updated, but much of the design remains the same, Yang says. “Wherever you are, there’s a door to walk outside,” she notes. “And there are windows throughout to let the light in.”

The home, built in a U shape, surrounds a courtyard with a firepit and mature landscaping. There are also two patios with fountains, a pool surrounded by a glass fence, and a pocket garden.

“It’s not like a modern house with an open-floor plan. It’s like a treasure hunt; there’s something different around every corner, ” Yang says. “It’s perfect for staying home, because each person can have their own space and everyone can meet up in the middle.”

Other May-designed properties do offer that open plan, however. A four-bedroom, five-and-a-half bathroom home in Rancho Santa Fe, Calif., boasts a flowing layout, as well as abundant natural light and a central courtyard that connects seamlessly to the indoor living areas.

Landscaping is key to ranch homes, and May is known for having brought in mature trees to plant on the grounds of his projects. This property is no different, note agents Eric Iantorno and Beth Van Boxtel of Pacific Sotheby’s International Realty. The home, built in 1973, sits on almost three acres and is currently on the market for $5.8 million.

“Cliff May used adult trees and plants at the time, and these days they are giant,” Van Boxtel explains. They include olive and pepper trees, plus a small fruit tree orchard, a vegetable garden, several kinds of berries, and a variety of tropical plants.

“The olive trees make it feel so romantic,” Iantorno notes. “And the details of the space—things are small and then expand, and that play on proportions makes it feel very special.” Single-level houses have gained in popularity as the baby boomer generation looks to retire and relocate to places without stairs. But Yang says she’s seen more interest in ranch-style homes from buyers of all ages.

People are attracted by the informal ease of living there, as well as the integrated indoor-outdoor experience. Others are drawn to the deceptively simple architecture. “They’re just brilliant little designs, and people are appreciating them,” Hess says. 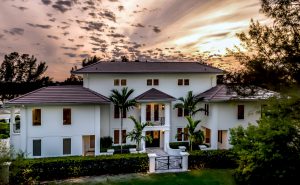 Whether you’re entertaining in style or lounging poolside with loved ones, you will find every luxurious element you need for a life well lived. Nestled on the exclusive North Shore of Boca Grande, where the most stunning and secluded beaches are found, the custom-designed property is at once breathtaking and welcoming. Rich textures and hand-crafted finishes, from wood and marble to custom cabinetry and window treatments, fuse beautifully throughout the over 8,000 square feet of space. Many exquisite vantage points sweep over Lake Gasparilla and the private pool area. Featured are 5 bedrooms, 5 full baths, a powder room, gourmet kitchen with butler’s pantry, elevator, exercise area, custom bar with wine room and a generous 4-car garage. The owner’s retreat is a place you will long to relax in, and includes a sitting area, custom closets, and lavish bath. Outdoor areas incorporate incredible balconies, lush landscaping, a heated pool and spa, custom shower and kitchen surrounded by fabulous alfresco entertaining areas. Deeded access to the exceptional North Shore beach provides the opportunity for kayaking, sunset walks, shelling and all the area has to offer. 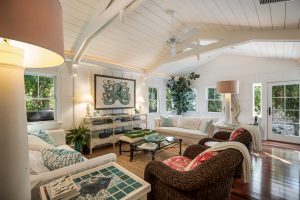 Built in 1935 and completely rebuilt and renovated in 2010 is a three bedroom, three and one-half bath charming cottage located in a historic neighborhood. Outdoor decorative handmade tile water fountain welcomes you with a limestone patio while the interior has been exquisitely renovated and meticulously maintained. The open layout flows beautifully and no detail has been overlooked. High ship lap ceilings and natural light compliment the neutral dcor in an open floor plan with Brazilian Koa hardwood flooring, board and batten walls, impact windows, and plantation shutters. The kitchen with custom cabinetry, bead board back splash, Carrara marble counter tops, and a stainless-steel garden sink opens to the living/dining area and an adjoining family room. The near by bar offers a 2-drawer fridge and ice maker. The spacious master suite features a walk-in closet, dual sinks, Crema Marfil counter tops/tile and French doors accessing an outdoor deck to the backyard patio. Two guest bedrooms have plantation shutters and ship lap ceilings with the guest bathrooms offering Carrara marble flooring. Other features include a new metal roof, and a one-car carport. The outdoors has been thoughtfully enhanced with a walkway, outdoor shower, limestone courtyard and tropical lush landscaping for added privacy. Only minutes to the village.